During the course and training for Police Personnel, Army, Railway Protection Forces RPF, Gm. Jimmy decided to organize a Taekwondo demonstration with the help of his brothers Mike, Ram and Lachman at the Oudh Gymkhana Club, Lucknow in 1975 and they performed the special techniques. The show was a big success. Thousand watched and admired it in excitement as we displayed high power Taekwondo techniques by breaking Marble tiles, Ice break and tiles, which vividly interpreted Taekwondo and differentiated it from Karate,  Kung-fu and Judo etc.  The public started taking interested and more than 100 candidates enrolled themselves to learned Taekwondo in Gymkhana Club, Lucknow in 1975.


This achievement encouraged Gm. Jimmy R. Jagtiani to established another Demonstration at Christian College, Lucknow on 2nd August 1976 with the help of brother Mike, Ram & Lachman along with the P.A.C. Police Personnel, the Railway Protection Forces Personnel, and the Trainees from Gymkhana Club, whom he had trained since 1975. The U.P. Taekwondo Training School was established and the Taekwondo Federation of India (TFI) was also formed on 2nd August 1976.


On 2nd August, 1977, the First Anniversary of Taekwondo Federation of India was organised with a demonstration of highly techniques at the K.D, Singh Babu Indoor Stadium. The students trained by Gm. Jimmy,  specially Mr. Inder Kumar Singh and Mr. Dinesh Kumar Singh both are Senior most student along with others entered the Arena and enchanted the viewers by their superb performance, which was inaugurated by none other than the Ambassador of the Republic of Korea His Excellency Mr. Bum Suk Lee and Dr. Banarsi Das Gupta was the Chief Guest.

His Excellency Mr. Bum Suk Lee, Ambassador of the Republic of Korea, was so fascinated with the performance and awarded Ambassador’s Medal to Gm. Jimmy R. Jagtiani and further he promised maximum support in promotion of Taekwondo in India and also to send Gm. Jimmy to Korea for further advance training under Kukkiwon, the World Taekwondo Federation, (W.T.F.). 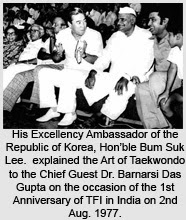 In 1978, Gm. Jimmy R. Jagtiani was invited by the World Taekwondo Federation (WTF) to Korea for higher training of Taekwondo under Master Chang Seoung Dong and received 3rd Dan Black Belt Certificate from Kukkiwon, the World Taekwondo Headquarter in 1979.
In Korea, Gm. Jimmy received rigorous training under Grand Master Chang Seong Dong from July 1978 to Sept. 1979, who transformed him into a Taekwondo exponent; on 18th Feb. 1979, he qualified 3rd Dan Black from Kukkiwon, Korea. He said he own immensely tribute to his Master Chang Seong Dong, who renders him the most competent guidance and co-operation all the way.

In 1990, Gm. Jimmy R. Jagtiani was elected as Executive Member of the Indian Olympic Association (IOA) and Asian Taekwondo Union (ATU) respectively.
In 2004, He was elected Secretary General of the International Taekwondo Academy (ITA), Korea. In this position, he helped produce technical seminars for the Black Belts holders and conducted International Instructor Courses and International umpires. He helped modify ITA tournaments rules and regulations and took active role in organizing the World Taekwondo Festival in Korea. Grandmaster Jimmy’s great achievements did not go unnoticed and was appointed as International Advisory Board for the Kukkiwon, the World Taekwondo Headquarter, Korea on 3rd Sept. 2008.

On 10th April 2009,  the Executive Director and the Technical Advisors of the Taekwondo Hall of Fame, USA conferred upon Grandmaster Jimmy R. Jagtiani, 8th Dan  as “ Father of Taekwondo in India ” in the Grand ceremony held in Marriot Hotel, New Jersey, USA.
“ In reaction, Gm. Jimmy said, although I have received countless awards and honors during my lifetime, but this honor conferred by the Taekwondo Hall of Fame, USA is the most treasured reward, the ultimate acknowledgement for my lifelong dedication to the Martial Art of Taekwondo, for the last thirty-four strenuous years”.
He was very happy to assume new responsibilities as it would allow him an opportunity to serve the greater cause of Taekwondo and give him a World-wide recognition.
He said,  this has added another feather on my cap, being the Founder of Taekwondo in India, Secretary General of Taekwondo Federation of India (TFI), and hold International Master Instructor & International Referee degree”.
Since 1975, Grandmaster Jimmy R. Jagtiani started and coached Taekwondo under the promotional schemes, produced more than 10000 black belt holders, 2500 National Instructors and 2500 National Referees and more than 3,00.000 students all over India  His contributions and leadership in the World of Taekwondo for over 40 years have earned him a spot in the Taekwondo Hall of Fame, USA as “Father of Taekwondo in India”.